Adventures and misadventures in France.

If Disney World and a Renaissance Faire got together, the Puy du Fou would be their beautiful French love child. Le Puy du Fou is a historical theme park nestled in the heart of France that serves as a tribute to French and Christian culture throughout the ages. Add in thousands of eccentric employees and volunteers, animals, and over-the-top special effects, and you’ve got the attraction voted 2012’s Best Theme Park in the world.

BUT WAIT!  That doesn’t look like any theme park I’VE ever seen before! Where are the roller coasters? Who makes a family theme park that revolves around periods of war? Was that a colosseum? Where are the anamatronic woodland creatures, and whose idea was it to include gigantic flame throwers?

Le Puy du Fou was unlike any other amusement park (or Ren Faire) that I had ever visited. Instead of the usual rides and attractions, it’s filled with a series of reconstructed period villages and outdoor theaters built to accommodate 300-14,000 spectators.  We only visited for the day, and with six shows on our priority list, it took a bit of scheduling wizardry and hustling to see each 20-50 minute show.

The first show we attended told the story of Marguerite, a shepherdess who must defend a castle from invaders. Plenty of cool horse tricks, an immense castle set disappeared into the ground, an another castle appeared in its place to spin around and shoot flames, and Jean d’Arc (Joan of Arc) made an appearance. 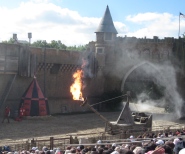 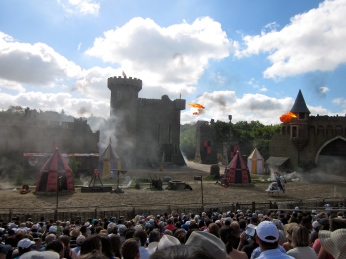 The vikings show came next, and I began to realize a common theme across each show – conflicts of the French Christians versus their barbaric enemies. A full battle ensued, including a viking invasion by boats that appeared out of the water (with living people inside! how did they DO it?) They had wolves attacking people not 10 feet from the front row, someone got lit on fire, towers exploded, and people were dragged behind galloping horses. Easily one of my favorites.

Knights of the Round Table

King Arthur pulled the sword out of the stone, faces challenges, and earns the respect and authority he deserves. Except that the stone spurted flaming water (another SFX mystery), the round table emerged out of a lake and re-disappeared below the water, and a table spun around. Not to leave anyone unimpressed, they included an actual swimming mermaid.

Set in a 7000-seat colosseum, this show represented Christian Gaul rebellions against the brutal Roman empire. We got to see plenty of gladiators and wild animals roaming around. The highlight, however, was an actual full-speed chariot race. There are only a handful of people in the world qualified to race 4-horse chariot teams, most of whom are employed by the Puy du Fou. 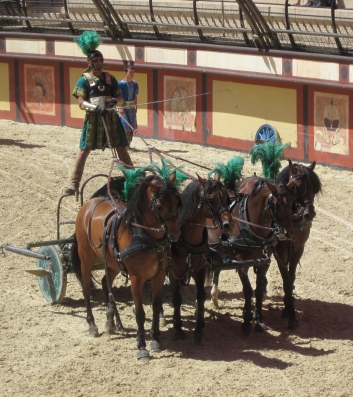 The Puy du Fou has its own falconry school. One show was meant to showcase their expertise, but also managed to include the story of…

Which was not particularly interesting until they unleashed 150 birds of prey simultaneously into the crowd. The birds are even trained to perch on spectators’ hats!

After char broiling in the heat all afternoon, it was time to visit the Richelieu Theater, the only indoor show at the Puy du Fou. As the name suggests, the show is loosely based on the story of the Three Musketeers. The stage is enormous – 80 meters long – 2600 square meters total. To put it in perspective, that’s half the size of an American football field. After some witty banter and fight scenes, we were thrown into a world of glowing horses, flamenco-dancing women – and the stage became a lake. The splashy dancing, horses, and crazy lights continued as the entire stage flooded with six inches of water.