Adventures and misadventures in France.

I’ve never been good at making (or keeping) New Years resolutions, so where’s some stuff that happened in 2013: 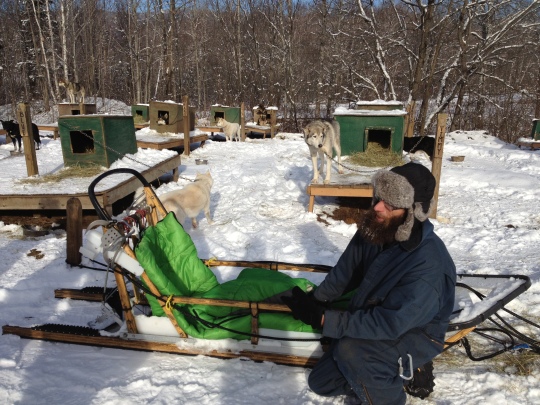 Started to work at a desk job in France.

Adjusted to rural life and learned to bake.

As an étrangère, an outsider/foreigner, it’s often difficult to distinguish French cultural traditions from those specific to Max’s family or life in the campagne. This was my  fourth New Years Eve spent in France, and it’s honestly one of my favorite holidays here. In my experience, it all boils down to fruits de mer (seafood), friends, family, and alcohol-fueled bétises (shenanigans).

This year, we spent the evening with close friends of Max’s family, Max’s brothers, and a bunch of goofy little kids. Dinner started around 8:30 pm with the apéritif, and ended around 4:30 am with dessert. WAIT… EIGHT HOURS?

If you’re thinking that it sounds excessive and terrible: What are you doing reading this blog?

If you’re thinking that it sounds delicious and fun, but exhausting: Exactly.

So after a few rounds of drinks and appetizers, we broke out the crustaceans. Shellfish in France is a holiday tradition, but with mayonnaise instead of cocktail sauce. But they do order these crazy delicious platters with all kinds of periwinkles, oysters, crayfish, and shrimp… that still have faces. 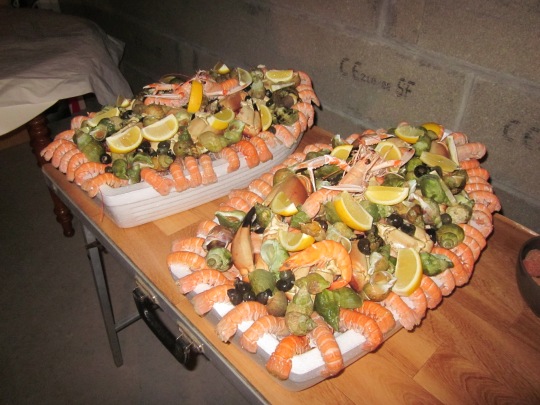 In the US, most people leave the TV on to watch the ball drop in Times Square as the clock hits midnight. In France, party hats and favors are distributed, everyone counts down to midnight, and then the party becomes a battle zone. This year, everyone got a paper ball shooter and unleashed tiny paper bullets without mercy for about half an hour. Which, surrounded by small children, alcohol, and glassware, is about as destructive as you can imagine. 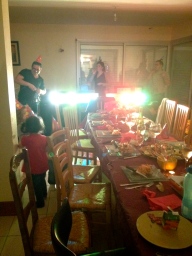 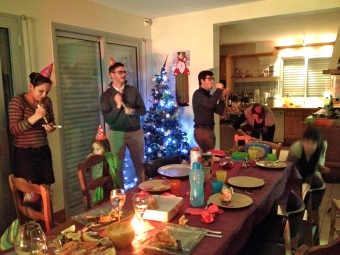 Note the blurry pictures. Nothing is simple when you’re being pelted from all directions. Shrimp everywhere.

Around 1:30 am, dinner was still being prepared, and most of us were starting to get pretty tired. We turned to music to get everyone moving again. Like this song about a crazy cow.

This year, the hosts asked me to bring dessert. Specifically, American desserts. Somehow I ended up making 70 tiny cheesecakes, cupcakes, and brownies. Everyone went to bed shortly thereafter, but we were up again the next day for leftovers lunch and another big family dinner. 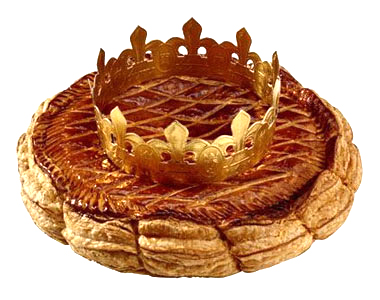 New Years also kicks off Epiphany season (January 6). Which means that people wish everyone they see bonne année and bonne santé (to the new year and your health) during the entire month. It also means that the galette des rois (kings cake) is served for dessert. Each flaky cake, sprinkled with sugar crystals, comes with a cardboard crown and a fève (small porcelain trinket) cooked inside the cake. The the youngest child present sits under the table and decides who gets each piece of cake. The person who finds the fève in their slice is the king/queen for the day, and needs to buy the next cake. The fève is usually a religious icon or TV character (baby Jesus, a smurf, etc.) My guess is that this cake will never catch on in America, because each cake would need to be covered in warning labels to avoid choking lawsuits. France is a far less litigious nation.

Check out other Expats Blogs

Well what do you know – it’s 2014! The past several months have been a whirlwind of business trips and vacation in the US, seasonal changes, and holiday festivities on both sides of the Atlantic. Calls and emails with friends usually begin with… “Wait where are you now?”

The region suddenly drifted from crisp sunny autumn to chilly and damp winter. We’re greeted by thick frost and fog on the way to work each morning, and rain almost every afternoon. Our village has been transformed by a massive overhaul of the roads and the addition of new sidewalks on several streets. Without a single blog post since August, I’ve got some serious catching up to do!

Some highlights from upcoming posts: